Compagnie Tontonballons went severals times in Saudi Arabia to present it’s balloon show during festivals, and in King’s Fahd Cultural Center as well with a performance including 25 000 balloons.

Compagnie Tontonballons went severals times in Saudi Arabia during 2017 et 2018 in order to present balloons show dedicated to families. « Compagnie Tontonballons was one of the first forhein troup performing in Al Khobar, in the east coast, with balloons and musicians on stage. The Kingdom now hosts international artists, and the audience has to be created, respecting local uses and traditions.

The 10 french artists presented a musical tale in english, live traduced to arabic on stage. They also presented a « Cabaret » while international balloons artists performed : Maxime Duby, Bidou, Romuald Bailly, Bastien Didier Pichat…and the famous Uncleballoons ! All the balloons were inflated the days before with a local team, while tecnicians were fixing stage, lights and sound system. The success was there, the audience was fond of balloon show ! 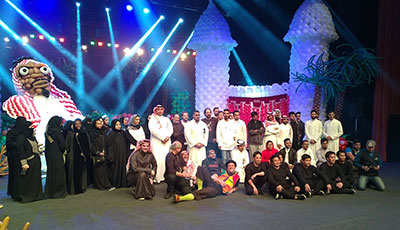